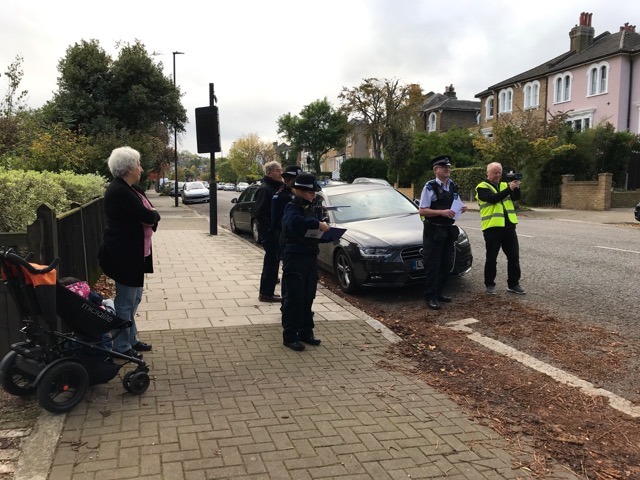 Friday 13th October 2017 proved unlucky for some speeding motorists on Lancaster Avenue as LARA ran its first Community Roadwatch event with the Lambeth Safer Transport Team led on the day by Police Community Support Officer Bruce Hay accompanied by two of his colleagues and ably assisted by residents from the Avenue.

Using a speed gun supplied by the Lambeth police team and expertly handled by one of the residents the Roadwatch team captured 78 vehicles travelling at 25mph or more in just 75 minutes between 4pm and 5:25pm. Of those 78 vehicles, 20 were captured travelling at over 27 mph and the  worst offender was clocked at a staggering 42 mph.

The registration numbers of all vehicles registering 25mph or more on the laser gun were recorded and have been reported to TfL by the police team. Drivers who are subsequently caught  speeding a second time will receive warnings, which for the worst offenders may involve a knock at the door from Bruce and his team, and further infringements will incur stiffer penalties.

Bearing in mind the presence of a nursery, two care homes and an infant school on our road and the long-standing nature of the 20mph speed limit the speeds some motorists were travelling at really does beggar belief.

PCSO Hay declared the event “very busy by any standard” and plans to return, this time with 2 speed guns, for a further event in the November. He assures us that the need to return so quickly is driven by the evident problem which affects our road and not by the excellent cups of tea and good company supplied to him and his team.